We recently published a blog post, which looked at how the travel giant – Expedia, were penalised for using techniques to stay in Google's top spot that weren't favoured by Google well now, another large company (this time in the UK) has got themselves into trouble with Google too.

A bank called Halifax - part of the Lloyds TSB Group (and UK’s largest residential mortgages and saving accounts provider) are now facing some big challenges online when it comes to their search engine rankings and have lost 20% visibility in Google.

On 6th February SearchMetrics.com recorded a huge visibility drop for the Halifax.co.uk website: 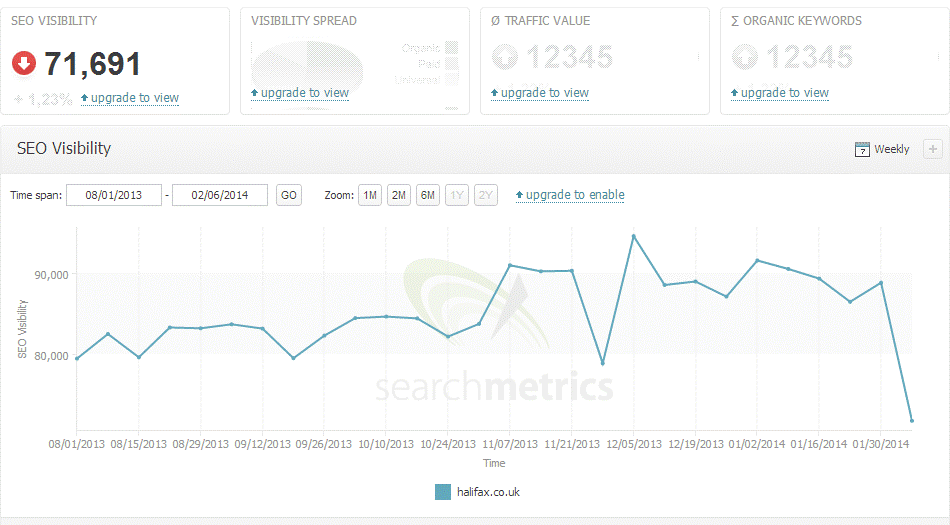 In this case, Google has penalised Halifax as it has recognised that low quality link building techniques have been used to help maintain their ranking. If you look at the chart below it’s clear that they suffered a severe drop in traffic to their website since the beginning of February and it looks set to keep on dropping.

After further investigation it looks as though they had a massive increase in the number of new links to their site during the month of December 2013 - from around 4,000/day to a whopping 40-50,000/day.

Where were they coming from?

- It looks like Halifax's seach marketing team was embedding keyword heavy anchor text links into widgets, which they then distributed to partner sites

- This was not their only "unnatural linking" strategy, just like Expedia, Halifax had a load of low quality directories and low quality guest blogs with some pretty keyword heavy anchor text, in its' backlink profile

- In addition to directort spamming and guest blogging, it also looks like Halifax's search marketer were piblishing an unnaturally large number of infographics, all of which had keyword heavy links

Does all of this sound confusing? Well, whether you're a business large or small, all it really means is now more than ever, it is important to have an SEO strategy in place that is legitimate and delivers genuine results rather than run the risk of getting penalised by Google. They have made it clearer than ever that they will be closing in on large companies who are opting to use black hat SEO technqieus in an attempt to rank in Google.