So this week Facebook released its latest feature – promoted posts. You can now pay up to $20 to have your post appear in more of your fans news feeds.

Currently Facebook shows each post you make to approximately 16% of your fans, (obviously with there being so much posted on Facebook a few of your posts are bound to get missed in amongst the sea of status updates and photos of pets) and until recently we had a choice of how much of a Page’s updates we saw by opting to follow all updates, most updates or only important updates. Facebook has now removed this option, and if you have a Facebook Page you have probably noticed it is displaying the reach percentage of each post under it. This reach can be as low as 4% of your fans depending on whether Facebook deems a post “interesting” or “boring”.

Below: A photograph posted for client Samudra, 378 Shares, 107 likes, 8 comments - and only a reach of 38%? Mass interaction yet Facebook doesn't deem this post "interesting" 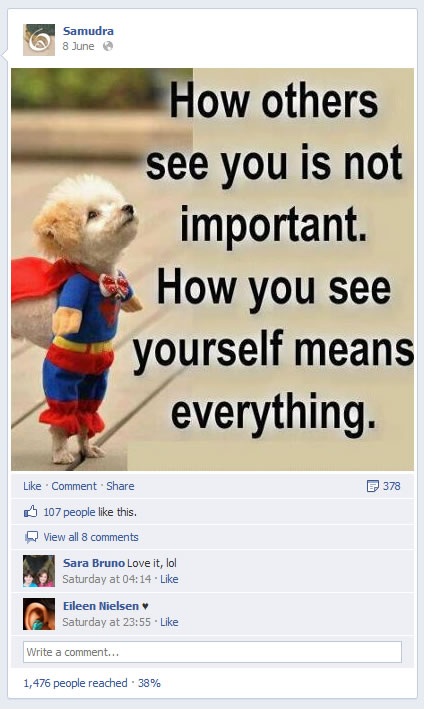 As long as you have at least 400 fans you are eligible to pay to promote your post – you can bid between $5 and $20 a post to ensure it appears in the news feed of a few more of your fans labeled as a “sponsored story”. So how does Facebook decide which fans see your posts, and more importantly, what does Facebook define as “boring”?

Facebook has been using an algorithm called Edge Rank for a while now, to determine which kinds of posts appear in your news feed. An edge (e) is any impression left on Facebook from wall posts to shares to liking a page. These edges are then “ranked” by measuring three separate factors:

If you and a friend have lots of mutual friends, and you frequently write on their wall, you will have a high affinity score with them. Facebook also grades the weight of every edge – sharing a photo or video would have more weight than sharing a link, and liking a page by searching for it would have more weight than liking a page you saw an advert for down the side of your newsfeed. In short your fans are worth more if they have actively sought out your page to like it, or have lots of friends who are fans of the page, than those who stumbled across your PPC advert.

Facebook also stops showing posts more than three days old to new people unless they are still being hugely interacted with, as they are considered “old news”. Facebook also adjusts time decay on factors such as how frequently a user logs into Facebook and how long it has been since their last log in.

As you might have guessed, your Edge Rank will be unique as each fan has a different relationship with your Page and therefore a different affinity score with it. Each user will also have different time decay depending on how frequently they use Facebook, and the types of posts they interact with the most.

Anyone who claims you can check your Edge Ranks is lying – it is impossible!

You can however measure your reach and general engagement with your fans using Facebook Insights. It is very hard to trick an algorithm into thinking you are interesting, so the best way to overcome it is to try and post more engaging content. Ultimately you want to be posting things fans will like and comment on. Don’t be afraid to ask your fans to like and share your posts! Engage with your audience by posting ‘fill the blank’ posts, polls and picture caption contests.

Don’t be disheartened if after all your best efforts your posts are still only displaying to 10% of your audience – naturally Facebook will want people to pay to promote their posts, but as with the weight of all new features, they eventually level out with regular features when they have been available for a while.

So should we be paying to promote our posts or not?
Promoted posts could be a very useful feature if you wanted to target a specific area of your fan base -for example based on location or language- but would only really be beneficial if these fans engaged with your sponsored story. In short – there is no point paying to promote a post to an additional 1000 fans if no one likes or comments on your post. In addition to this if Facebook sees people are willing to pay for their existing fans to get to see their updates, they will start to expect it. After all, they have to pay those shareholders somehow!